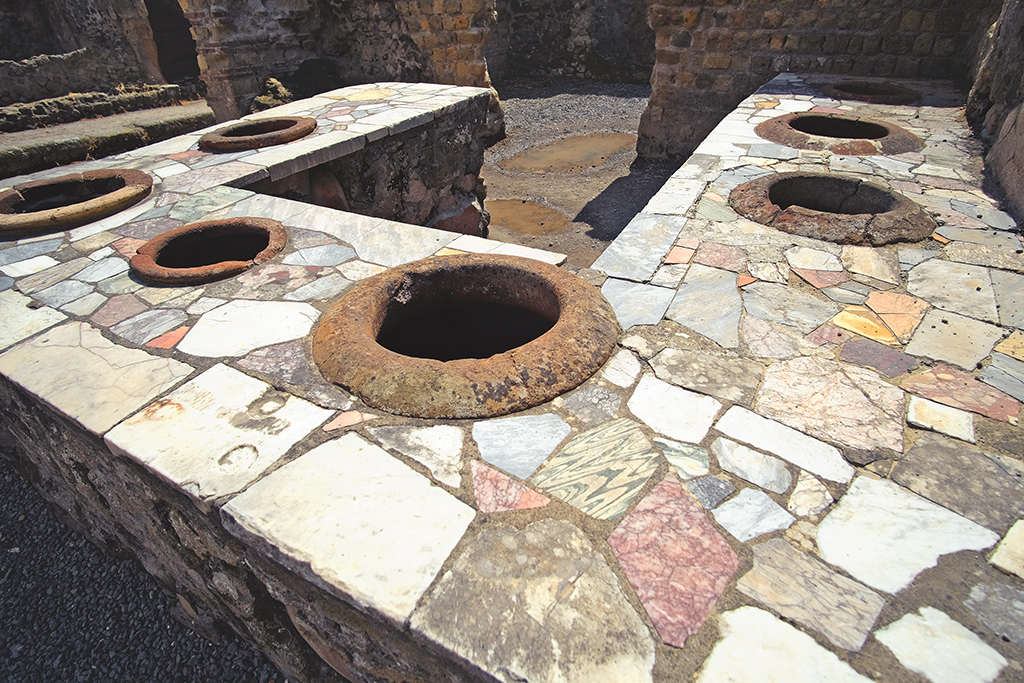 Photo By Zsofia_R at Shutterstock

Historians believe sewers were invented in Mohenjo -Daro. This would have taken place in 3500 B.C. This is before the technology we have today, before the invention of the toilet, before plumbers, and before modern-day plumbing appliances.

This ancient society was able to produce metals such as copper, tin, and bronze. They also used mechanisms involving weights to remove waste from their homes. Historians have concluded that this society was very keen on the benefits of cleanliness due to the extensive and thorough sewage system. Drain lines were connected to the main streets. Even the smallest of homes were connected to the sewer line. The sophistication of having indoor plumbing is not foreign to ancient civilizations. The invention and innovations of this time would eventually be lost to us and we would have to then rediscover better plumbing practices and time passed. Plumbing systems today have become more complex. If you are having issues with your plumbing it would be wise to contact your local plumber, from Metro Plumbing in Chattanooga, TN.

The ancient Egyptians created techniques to create a copper alloy. They would then use this metal to devise pipes out of them. Ancient Egyptians utilized copper tools to build irrigation systems that controlled water flow from the Nile River to the crops. This was very important for them. If there was too much water their crops would flood. If there was little to no water the crops would dry out and no food would grow.

Archaeologists discovered a copper draining and plumbing system in a pyramid while excavating an area meant for burial. This doesn’t come as a surprise due to the Egyptians believing that their dead were able to utilize these luxuries in the afterlife. The Egyptians also buried other personal items in these pyramids with the deceased.

People who have passed on obviously don’t need these amenities, but the practice of including such luxuries for the dead is a statement to the fact that the ancient Egyptians lived very civilized and clean lifestyles. In modern times, the endless supply of water flow should be celebrated. Without this very necessary invention, life would be much harder. Growing food wouldn’t be as easy, and we’d have to operate our daily lives differently. Hire an expert plumber from Metro Plumbing in Chattanooga, TN to help ensure your water supply line is operating correctly.

Ancient Greece also played a part in the history of plumbing. They create an intricate drainage system that consists of several sinks, manholes, and lavatories. The steepness of the lad was perfect proper drainage. To assemble their drainage system, they tapered pipes to prevent sediment build-up and used Terra Cotta as the material for pipes. The pipes were made precisely. The joint sockets had to be perfect in order for them to work. Today’s plumbing systems can sometimes be just as intricate. These intricate designs require expert plumber knowledge and skill for proper maintenance. Contact Metro Plumbing if you need a plumber, and live in or around Chattanooga, TN.

On an excavation in Greece, archaeologists stumbled upon a queen’s bathroom with a long bathtub inside. The bathtub was around 5 feet long and was designed to be filled and drained by hand. To empty it they used a drain on the floor which led to the nearby river. The bathroom also had one of the world’s first flushing toilet-like mechanisms. It resembled a water closet. This mechanism was designed to be flushed by rainwater, or manually. Luckily, in modern times, our plumbing systems are significantly more efficient and convenient. If your plumbing systems aren’t working properly, you could find yourself living in inconvenience all the time. Drainage issues are no joke. It can lead to more serious issues if it persists. If you find yourself unnecessarily living inconveniently, you should contact a Metro Plumbing plumber to help get your home appliances back on track.

Around the year 710 B.C, the first shower was invented. The earliest record of a shower was when King Sargon ll ordered his slaves to pour water over his head in order to bathe. This is a long way from the showers we have today. This type of bathing was the first of its kind. Our showers now are efficient mechanical appliances. You can make your showers more efficient by changing the showerhead or adjusting the water heater. If you want a more efficient plumbing system or need help fixing or changing your shower head, contact Metro Plumbing plumbers in Chattanooga, TN.

The Roman plumbing systems were very advanced. There was a lot involved in making such intricate systems. The Romans plumbing systems evolved and got better over time. At one point in time, the Romans used aqueducts to carry water from the countryside all the way back to Rome. Aqueducts act as channels for conveying water. The aqueducts were responsible for carrying billions of liters of water to Rome every day. This water had to make a 57-mile journey every day to Rome. Once the water reached its destination, it was collected in tanks and then distributed among the Roman citizens. The distribution would take place via pipes that led to fountains, bathtubs, and toilets.

The Romans actually had pipes that ran both hot and cold water. The temperature altered water was only available to the rich, as well as the sewage system. As time progressed and the need grew stronger, public bathrooms would become available for the general health of the public.

Bad plumbing has been studied in order to determine how much the result of this unfortunate mishap contributed to the downfall of the Roman empire. Ancient Roman plumber’s ad engineers decide to replace the already functioning plumbing system with lead piping around the year 200 B.C. The piping was engineered very well and improved the functionality of the plumbing systems but ultimately caused many deaths. Unfortunately, the death toll was especially high in infants and children. As you may know, lead is toxic, especially if ingested. Having led in the drinking and bathing water rose the levels of lead to 10 times the amount that is safe enough to consume. This unfortunate mistake leads to a decrease in the Roman population and could have had something to do with the fall of such a powerful empire.

Surprising. Lead is still popping up in some homes. Other materials corroding and fusing into the water can lead to illness and even death. This is something that usually happens in old homes. If you suspect that any dangerous materials may be in your water contact a plumber. You may notice something is a miss by the color or smell of water. If your water tastes strange you should stop drinking the faucet water and call your local Chattanooga, TN, plumber.

Toilets have a long history. The first recorded invention for a flushing toilet of sorts as recorded in ancient Greece. Nearly half a millennium ago, in 1596, the godson of Queen Elizabeth I was banished from the queens’ royal court. He was said to be telling inappropriate stories. During his banishment, the godson of the queen -Sir John Harington- managed to invent a working flushing toilet. It closely resembles the toilet we use today. It consisted of a bowl and a handle. It did it look as comfortable as the modern toilets we have today but must have been revolutionary for this time.

The queen had forgiven Sir John Harrington and went to visit him. Upon her visit, she was intrigued and delighted by his invitation and demanded he builds her one. This is in part the reason the toilet is sometimes referred to as the john.

America’s first citywide plumbing system happened in 1652 when Boston’s early settlers created cooperation that installed water systems for assistance fighting fires. The piping was made from hollowed out wooden logs.

In 1664 France revolutionized our plumbing systems by creating a water supply system made of cast iron. The water main was extended for 15 miles from a pumping station to a palace. The main also provided water to a town. The water was used for gardens, fountains, and other domestic things. The plumbing system King Louis XIV ordered to be built lasted for more than 330 years. A water supply system this large definitely required regular maintenance. You may never have to replace your entire plumbing system if you get the proper maintenance. Older homes may need more regular maintenance then a newer one, however regularly scheduled maintenance practices are essential for pipes and their longevity. Contact a plumber from Metro Plumbing if you live in or around Chattanooga TN.

The first mechanical shower was first invented in 1767 by a manufacturer named William Feetham. The shower was named the English Regency Shower. At the time it was only available for the wealthy. As time passed, the English Regency Shower slowly became accessible to the public. The shower consisted of a bathtub or basin, and a water tank that stood over top of the person standing in the basin. The tank pumped water upward against gravity, via a hand-operated pump. There was a chain that would allow all of the pumped water to be dumped on top of the bather’s head and thus, all over the bather’s body. This would cause the water to flow into the basin, which would then be drained and recycled for the entirety of the bath. This very clever design was the precursor for the shower we now get to enjoy today. Showering used to be more difficult than the shower mentioned in this paragraph. If your shower is starting to feel like a task due to bad water pressure, clogged drain, or imperfect temperatures, the plumbers from Metro plumbing can help make showering feel like a luxury again.

Showering today is the preferred choice over a bath. But in 1767 hot baths had already been a common practice. Showers weren’t as appealing as a nice warm bath. Showers use recycled water, which tended to be cold and would become dirty very quickly. It would take a long time for showers to grow in popularity, with a big reason for the popularity being the invention of water heaters. Water heaters are so important to your everyday household needs. Without a water heater, we wouldn’t have instant hot water. Instant hot water is a much-needed luxury. If you are having any issues with your hot water it could be due to a variety of reasons. If one of the reasons is an issue with the gas company you should square that away with them, otherwise contact a Metro Plumbing in Chattanooga, TN for a professional and skillful plumber.

Plumbing has come really far. Our pipe systems have served us in the past and will continue to do so if we care for it properly by utilizing local, expert plumbers and doing what we can’t protect our systems. Metro Plumbing plumbers are professional and readily available for any plumbing issue If you live in Chattanooga, TN, contact Metro Plumbing, Heating & Air for a prompt and expert plumber to assist you.